Breaking News
Fully Vaccinated Young Adults suffer 73% increase in Heart Attacks & Strokes and 92% higher Mortality Rate compared to Unvaccinated
Jordan Sather, Buffalo Shooting – These Flags Won’t False Themselves!
Todd Gregory and Erik Gregory, The Thousand-Year Progressive Reich
Joachim Hagopian, Today’s Shifting Balance of Power, Elites’ Endgame Dystopian Nightmare: Its Winners and Losers
Democrats Silent as Republicans Rip Into Secret Royalty Checks to Fauci, Hundreds of NIH Scientists
18 May, 2022
Skip to content
The following presentations were presented at the invitation of the Portland 9/11 Truth Alliance and 9/11 Truth Seattle. My hosts, Tim Titrud and Ben Collet, were as gracious and accommodating as they could be. The presentations were well-advertised (www.911truthseattle.org), there were early radio and television interviews, and I had a wonderful time and throughly enjoyed my visits. The audiences were very well-informed and asked excellent questions. All in all, it was a splendid long weekend. What I am providing here may be viewed as updating and refining the positions I presented in “Thinking about ‘Conspiracy Theories’: 9/11 and JFK“, which is google accessible and which appeared in THE 9/11 CONSPIRACY (2007). A special note of thanks to Bill Coones and Bill Alford, videographers, for their excellent work in producing these three videos.

I misidentified one of the probable shooters as “(Jim) Lewis”, when I mean Jack Lawrence, an Air Force expert, not Jim Lewis, who has been traveling around the South and firing high-velocity bullets through windshields of wrecked cars in junkyards to see if he can hit dummies in the back seat. Jim has discovered that the bullets make the sound of a firecracker as they pass through the glass, which explains early reports that the first shot sounded like a firecracker. I have received a letter from a man who was stationed at Kelly Air Force Base in San Antonio, TX, since 1960. He told me that Lyndon often flew into and out of Kelly and that, “in February of 1963, the very best snipers in all the military branches and government agencies came to Kelly along with 2 Texas Rangers. The Rangers told a friend of mine that they had been invited to a shooting competition. It would last for two weeks, firing 8 hours a day to see who were the best snipers.” Lawrence may have been selected for this task on that basis. 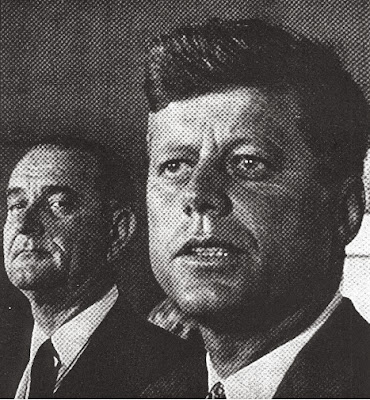 At about 1.5 hours into my presentation, a series of slides [attached: link here] was missed, where I explained that a controversy has arisen over the identification of a man in Dealey Plaza who has been IDed as Lucien Conein, a notorious assassin for the CIA. Allan Eaglesham, who has done good work on “Familiar Faces in Dealey Plaza“, had posted a notice that this person was not Conein but a local resident named Robert Adams, who allegedly had been presented with a plaque for having been in the photograph. Jack White and I found this puzzling, so I asked him to study the images of these persons so see what he could determine. The facial features of Adams and the man were quite different, where Adams has a long face, a long chin, and his left ear top-in. Conein and the man, by contrast, both have a square face, short chin, and left ear top-out. He established further differences, including that the Adams supranasal ridge is twice as wide as that of the man and of Conein. The plaque turned out to be an obvious fake, which shows that promoting misinformation on JFK is alive and well to this day!

Several interviews, including one on television, were conducted the week before my first appearance in Portland:

10 thoughts on “Conspiracy Theories: A Triple-Header”